I didn’t do nearly as much as I wanted to with the HTC Vive this week. Although, I did finally manage to take some screenshots from Google Earth VR. Turns out some programs disable the option to take screenshots which is why I was having so much trouble with it!

I didn’t get a chance to download the Virtual Desktop to view 360 photos directly from the Vive. I also didn’t have a chance to try this hack to use Facebook Spaces on the HTC Vive. Maybe I’ll give those two things a shot this weekend.

HTC Vive with controllers.I had one meeting in rumii today which meant Vive time! I am happy to report that I had no issues with the lightboxes, controllers, or SteamVR. rumii booted right up into the HTC Vive and I flawlessly jumped into my meeting. Although my dog did give me a scare when she busted in and started throwing her ball around the plugged in lightboxes. Hence, why I recommend a doggie gate. 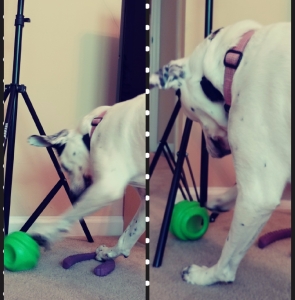 Today, I couldn’t help but think about the importance of hand gestures in meetings. I have worked remotely since 2013 and this is the first time that I am able to use my own hand gestures and see my coworker’s. Despite what Skype will have you believe, I can count the times I’ve had a video call on one hand.

I found that I have to pay extra attention to what my hands are doing because my coworkers can see me now. They can see if I’m letting the controllers dangle from my wrists because it looks like you have broken wrists in VR. I have to be careful not to play too much with the controllers, such as making hand gestures, pointing the laser at random things on the wall, or accidentally teleporting. It will look like I am not paying attention in the meeting. Being in VR forces me to pay attention because I can’t drift off to Instagram while putting myself on mute.

On the flip side, I haven’t been drifting off in meetings as much since I’ve been able to attend them in VR because I can see hand gestures. I forgot how much I was missing, not being able to see my co-workers point graphs on a PowerPoint or describe tasks to by mimicking them with their virtual hands. Not only that, but I can respond nonverbally by giving a “thumbs up” or high fiving my coworkers to show how proud I am of their accomplishments.

While I always felt like part of the team, working virtual reality really seals it in.

Takeaways from a week in the HTC Vive

That wraps up the week! Make sure to follow me on Twitter or my blog to stay up to date on my virtual reality adventures.

Catch up on the past week:

Get the Best from Lilyotron