This tutorial uses Facebook Spaces as an example how to play Oculus Rift games on the HTC Vive. It is an update to this hack.

UPDATE: Facebook Spaces is now available on the Vive.

*Hint* Use the inside buttons on the controls to select and touch objects. The trigger is used for functions like drawing. I think the circle pad can change facial expressions but I wasn’t able to get it to work exactly every time.

*Disclosure* Keep in mind that Facebook Spaces is in beta. It’s not going to be 100% perfect and we shouldn’t expect it to be at this point. As someone who has been in the software industry for almost a decade, I think it’s amazing how good it works. Those 3.5 stars on Oculus Home is not deserved.

I can display my own 360-degree photos and videos as my “space”. I recently went to Orlando Studios and got tons of 360 photos of Harry Potter world. Displaying these in Facebook Spaces made me feel like I was right back at the scene. 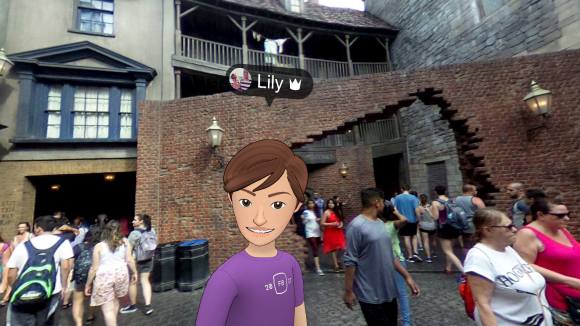 I called my mom on Facebook Messenger from Facebook Spaces. This was particularly awesome because she was out celebrating my cousin’s birthday with the rest of our family. (I wasn’t there because I live states away. I’m not a bad cousin).

Even from inside a noisy restaurant, I could clearly hear my mom. It took her a minute to find the Messenger speaker button to hear me though. I doubt she was on wifi. The picture came in clear. I was able to say, “hi” to my cousin and the rest of my family.

Why not just do a regular call? Because being able to express yourself without having to hold a phone or prop it up at a weird angle is awesome. The same reason I love virtual reality for meetings is the same reason I enjoyed being on the video call with my family. Since I was an avatar, I didn’t have to worry about what I looked like or if my apartment was clean enough to be seen. I could express myself freely and I think that came across to them.

Even from the HTC Vive controls, I could tell there were some hand gesture capabilities. The fine tuning of these will make hanging out in virtual reality even more natural. I like how Facebook managed to give the avatar’s arms which bend at the elbows.

I spent close to an hour in Facebook Spaces without even realizing it. I can’t wait for future releases but I think it will only get better. Now, excuse me while I go re-live my fairy tale vacation in Diagon Alley.

Next Steps: get other people to be in Facebook Spaces with me! Let me know if you want to meet up in VR.

Get the Best from Lilyotron